You can help the Shattered Horizon Wiki by improving this page. (View All)

Moondust is an oxygen-rich fragment of Moon rock where MMC miners have set up a mining facility. This is a risky venture, as the Arc's rotation brings it right under the ISA's nose. The MMC has little choice: with most of Moon's oxygen farms destroyed, they are literally fighting for air.

Moondust is designed to be accessible to new players. It features a lot of indoor spaces, corridors and caverns. There are man-made structures which give a natural sense of “up” even though there’s no gravity. Combat tends to be close range and sudden.

Add a photo to this gallery 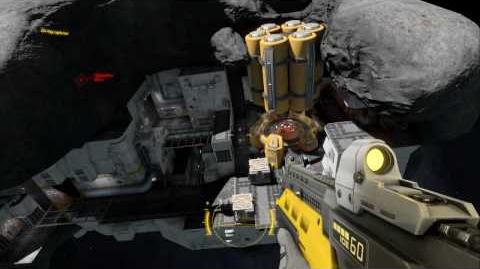 Here a video that shows basic beginner tips for the Battle mode on Moondust: 500px

Near the Quarters of Moondust players can see a list of the crew working in Moondust. The names are all people who work at Futuremark and you can find many of them, together with their real jobs, in the game's credits.

The Zero-G Spot can be found in the map Moondust, the Quarters section. It's an adult entertainment facility open 24/7. 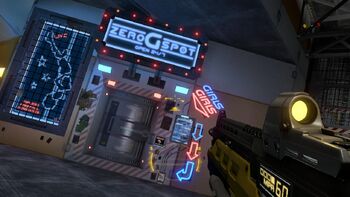 On the same board as where the Moondust Crew is visible is also a news bulletin, holding information about the Space Olympics being cancelled due the Moon catastrophe.

"Zero-G Sports Entertainment Inc. (ZGSE) announced today that this year's Space Olympic Games are "delayed indefinitely". Spokesperson for ZGSE, Amy Black indicated that the Moon catastrophe was the reason for the games' cancellation: "Kessler Syndrome, as we all know, makes orbital launches too risky for our athletes and officials, not to mention the fans. The Space Olympics have been struggling financially since their inaugural games four years ago, although the games seemed to be making a comeback after signing on MMC as the main sponsor last year."

In the Admin section of the map Moondust, you can find a map showing the layout of Moondust.

Retrieved from "https://shatteredhorizon.fandom.com/wiki/Moondust?oldid=5645"
Community content is available under CC-BY-SA unless otherwise noted.